Got questions about AdTech?Fill in the form below and ask our team 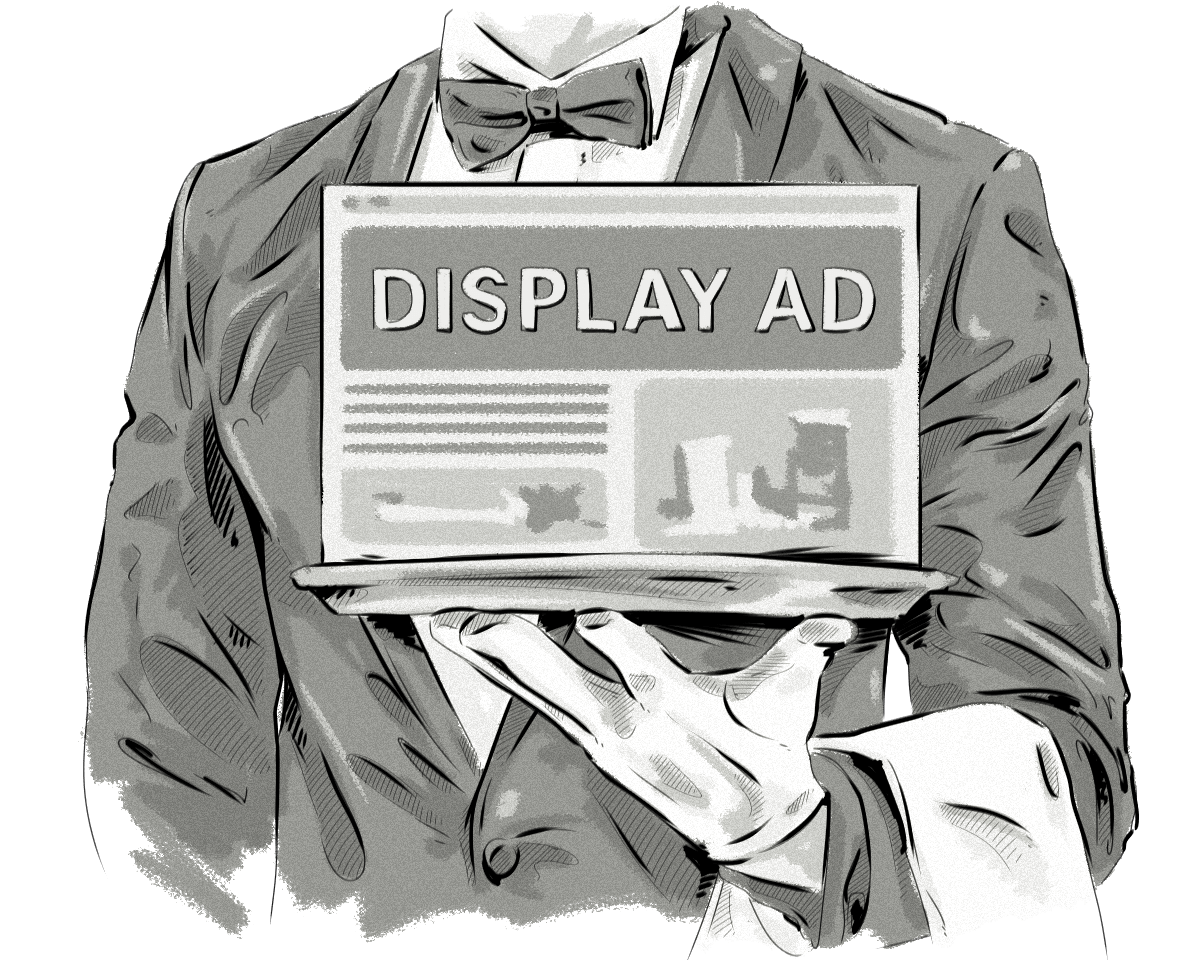 Since the beginning of online advertising over two decades ago, a number of technologies have been introduced to solve the numerous problems advertisers and publishers face and to improve the entire media-buying and selling process.

While the invention of AdTech platforms like demand-side platforms (DSPs), supply-side platforms (SSPs), and ad exchanges helped shape the online advertising ecosystem, it’s hard to look past one early piece of AdTech that is still relevant today — the ad server.

Ad servers have constantly evolved to meet the demands of advertisers and publishers and adapt to the rapidly changing field. As a result, many of the functionalities—e.g. targeting, budget control and frequency capping—appear in many of the more recent platforms, such as DSPs and SSPs.

In this chapter, we explore one of the most fundamental technology platforms and processes in online display advertising today.

You’ll not only learn about an ad server (platform) and ad serving (process) and how they work, but also uncover their inner workings and why they are a vital component of online display advertising.

What Is an Ad Server?

An ad server is an AdTech platform responsible for making decisions about what ads to show, serving them, and collecting and reporting data on impressions, clicks, etc.

To help you understand the role of an ad server, think of it this way:

Ad servers are to ads (creatives) what WordPress is to content (articles).

Publishers, advertisers and ad agencies use ad servers to run multiple campaigns, often by connecting to other AdTech platforms, such as demand-side platforms and supply-side platforms.

Campaign Execution Using an Ad Server: Then and Now

The way online ads have been bought, sold, and delivered has changed a lot over the past two decades, but what hasn’t changed is the importance and role that ad servers play.

Below is an illustration of how the ad-serving process looked in the late 1990s to early 2000s, and how ad servers emerged.

In the early days of online advertising, executing a campaign was a manual process that only involved direct communication between the advertiser and publisher.

Then, the publisher’s ad server was introduced to help them run and report on advertisers’ campaigns.

Here’s how the basic flow would look:

What’s the Difference Between Ad Trafficking and AdOps?

The terms ad trafficking and AdOps are often confused with one another, but there is a small difference.

Ad trafficking is the name given to the process of setting up, monitoring, and optimizing the campaigns conducted by ad servers and/or other AdTech platforms.

AdOps are people who are responsible for setting up, monitoring, and optimizing campaigns.

A publisher’s ad server is tasked with filling the ad slots on a website by matching ads from direct campaigns, real-time bidding (RTB) auctions, and other media-buying processes.

They do this by making decisions about which ads to show on a website based on the targeting parameters of campaigns set up by advertisers, serving those ads, and reporting on their performance.

Another feature of ad servers is inventory forecasting, which involves predicting how much inventory a publisher will have available in the future and the performance of ad campaigns based on current and historical data.

Soon, advertisers started using ad servers to measure the performance of their campaigns for themselves. These ad servers are known as a third-party or advertiser’s ad server.

Earlier in the book, we outlined the following challenges advertisers faced when dealing directly with publishers:

Even though the invention of the ad server solved many of these challenges through automation, new challenges arose for advertisers.

The booming online ad business was attracting more new publishers; however, not all of them were playing fair. Advertisers soon found that they could no longer trust the reports generated by publishers and ad networks.

An ad server allows advertisers to:

How Does an Ad Server Work?

Now that we know what an ad server is and what it is responsible for, let’s take a look at its mechanics.

First, let’s look at how a publisher’s ad server works:

And now an advertiser’s ad server:

While first-party and third-party ad servers are essentially the same type of machine, they fulfill different responsibilities for publishers and advertisers.

How Ad Serving Works From a Technical Perspective

Below are two detailed technical examples of how ad serving works.

The first illustrates how ad serving works with just a publisher’s ad server:

The second illustrates the ad-serving process with both a publisher’s and an advertiser’s ad server:

The Anatomy of an Ad Server

Below you’ll find the various ad-serving components, such as the ones listed in the diagrams above.

An ad tag is a piece of code that is inserted into an ad slot in order to display an ad.

There are different types of ad tags depending on their implementation.

Below, we list the most common ad tags, how they are used and implemented, and the advantages and disadvantages they offer:

Usage: For rendering display ads on web pages via a desktop or mobile browser. JavaScript ad tags are also used for display ads in mobile apps, but generally these will be custom tags or Mobile Rich Media Ad Interface Definition (MRAID).

Usage: For rendering display ads on web pages via a desktop or mobile browser.

Implementation: Iframe ad tags are HTML tags that are added to a publisher’s page code. The iframe completely isolates the code loaded in the iframe, and therefore, prevents it from interacting with the rest of the content of the website.

Here’s an example of an iframe ad tag from OpenX:

In order to solve the issues related to both JavaScript ad tags and iframe ad tags, a new standard was introduced – SafeFrame.

SafeFrame is an Interactive Advertising Bureau (IAB) standard that combines the advantages of iframe and JavaScript tags and eliminates many of their disadvantages.

The SafeFrame ad slots are implemented in JavaScript with an API that loads the actual ads in iframes, but allows them to interact with its API to expand the content or track viewability. At the same time, it protects the publisher’s site from unwanted changes and prevents visitors’ sensitive information from being collected.

Here’s how the SafeFrame implementation works:

It’s important to note that the ad in the iframe loaded by the SafeFrame is isolated – i.e. third-party ad servers can run any JavaScript code inside the iframe, but it won’t affect the publisher’s website. Only specific sets of instructions and interactions with a publisher’s site are allowed via the SafeFrame API, such as data collection for viewability and measurement.

VAST and VPAID (For Video Ads)

VAST is an XML schema developed by the IAB. It enables in-stream video ads (i.e. ads are displayed in the video player, like on YouTube) served from video ad servers and played in video players on a number of publisher sites and on different devices (e.g. desktop, mobile, tablet, etc.).

VPAID is a piece of JavaScript that enables video ad units and video players to interact with one another.

IMG ad tags are HTML tags and are similar to iframe tags.

Usage: These ad tags are mainly used to display ads in mobile apps and in the <noscript> section of other types of ad tags, which are used as fallbacks when the browser does not support or execute JavaScript.

Most AdTech platforms and publishers will only accept snippets of HTML/IMG ad tags and not full HTML code (e.g. no <html>, <head> or <title> tags).

See example of an HTML/IMG ad tag below:

In order for advertisers to keep track of ad tags used in their campaigns, they often create spreadsheets.

A typical spreadsheet will include the list of placements and the respective ad tags. Even though this is a manual and error-prone process, it is still the most common way of trafficking the non-programmatic display campaigns (i.e. direct deals between a publisher and advertiser) and also some programmatic campaigns when using self-serve AdTech platforms.

Ad markup is a piece of code that’s retrieved from an ad server or some other AdTech platform via an ad tag and rendered in an ad slot.

See an ad markup example below:

Read and download the PDF and receive all future updated versions of our AdTech Book.

Fill in the form to download the PDF and join our AdTech Book email list to receive all future updated versions.